Some older hearts were pounding after this lift of four 8-seater picnic tables made at the Shed for Pirinoa School, in partnership with Juken New Zealand...

Each school holiday up to 70 kids attend the Henley Mens Shed for some fun making things with some guidance from the Blokes at the Shed...

Yet another diversity in the range of activities available at the Mens Shed is this group, inspired by the desire to recall and capture life growing up...

"So what is this MENS SHED?"

The concept of what a man does in his shed in the backyard is brought into a community setting, so adding the atmosphere of blokeship and forming new friendships.

Those who join the Henley Mens Shed can share & develop skills, make or repair things, relate experiences, discuss health and other issues, talk about anything while enjoying a cuppa & biscuit or even another blokes scones.

Aimed mainly at retired and older men in the community, the Men's Shed has proven to be a great place to break the boredom that is often associated with extra spare time resulting from major life changes such as downsizing the family home, loss of a partner or retirement.

The Men's Shed is run in a relaxed manner where Men can just call in when they want, stay as long as they want and do something or nothing.

You will see blokes repairing things for home, or making a new item or a toy for the grand-kids, sitting in on a talk over an issue important to men, or joining a small team doing a community project. So many things to do at the Men's Shed - no wonder it's so popular.

New Blokes are always welcome to call in and check the place out during regular hours.

For further information contact the Shed Coordinator John Bush on 0274 999 430 or email - henleymenzshed@xtra.co.nz. 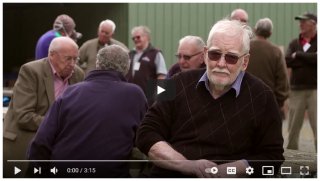 This video was sponsored by Fair Dinkum Sheds NZ, as a promotional video for Mens Sheds NZ, of what Mens Sheds are about, it was principally filmed at Henley Mens Shed.   Click   HERE   to view video

Members receive email newsletters, alerting everybody to events members may wish to participate in, or lend a hand with a project...

The Mens Shed has a vast range of tools and machinery. Standards have been established, drawn from industry best practice to keep everyone safe and happy...
Read More